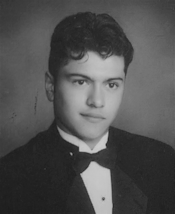 The consensus among the Coastside soccer community is that Fausto Villegas is the best soccer player ever to play on Cougar Hill. His accomplishments and honors support such a claim. Not only did Fausto play on the varsity team as a freshman, he was named to the All-PAL team a total of four times. He was also named Defensive Player of the Year and was the leading scorer in the NPL. Fausto was named to the All American Youth Boys team several times and to the All-American high school boy's team in 1998. He was also selected for the U-17 USA Men's National Teams.

He was the All-American Parade Player of the Year in 1997 and from 1995 to 1997 participated on the Under-17 National Team and played in the Under-17 1997 World Cup in Egypt. Villegas received a soccer scholarship to play at San Jose State.  His Half Moon Bay High School uniform, number 15, has been retired.