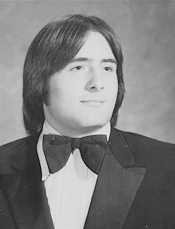 Brad Walters was driven to succeed. He describes himself in his freshman year as a "weak, fat boy with glasses," weighing 191 pounds and bench-pressing 140 pounds. In his senior year he benched 330, squatted over 400 and ran the 40 in 4.9. He participated in football, wrestling and track & field. Brad was driven by an ever-present desire to be a great athlete. By the time he was a senior, he had been named 1st Team All-League in football, unlimited wrestling champion and league champion in the shot and discus. In fact, in his senior year, Brad won every track meet he entered through the league championships and finished third in the CCS finals to qualify as Half Moon Bay's first ever student athlete in the State meet. His throws of 56' 1" in the shot and 169' 11" in the discus are still school records.