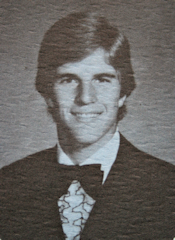 Craig Branstrom is one of the top all-around athletes in the history of San Mateo County. He was named to the All-NPL football team twice, the All NPL basketball team twice, and he was NPL champion 10 times in track and field in 4 different individual events and was a member of the school’s record setting 4x400 relay team. Craig was the CCS Region 1 champion in the high hurdles and two-time champion in the high jump. In his senior year, Craig cleared 6’11” in the high jump to break the San Mateo County record. He went on to qualify for the State Meet. He is tied for 5th on the All-Time CCS high jump performer list, and holds school records in Triple Jump, 110M High Hurdles, 300M Intermediate Hurdles and High Jump.

Branstrom received a full athletic scholarship to The University of Kansas where became a decathlete and scored a best of 7,525 points, ranking him number 4 on the all-time Jayhawk list. Craig also won the Big-8 championship in the high jump and decathlon and earned All-American honors. He is a member of the KU Athletics Hall of Honor.