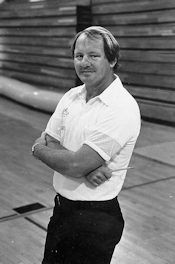 Jack Coolidge was an outstanding football player and boxer at San Jose State College, where he was named Most Inspirational boxer in1958. When he became a coach he channeled that inspirational leadership and commitment to every one of his Half Moon Bay Cougars. Jack discovered an athlete’s strengths and used them to the disadvantage of his opponents. His intelligent, cunning and strategic assault on opposing teams put the Cougars in their best position to win.

Coolidge came to Half Moon Bay High to teach physical education and math in 1969 and to serve as assistant football coach in charge of the defense for head coach Jerry Murphy. He became head coach in 1981 and proceeded to win four NPL championships in ’90, ’91, ’92, and ’93. As soon as the football season ended, Jack gathered the wrestlers onto the mat and established Half Moon Bay as one of the premiere wrestlilng teams on the Peninsula. Under his leadership, HMB wrestlers won four NPL championships. Coolidge is responsible for delivering some of the most powerful lessons about teamwork, commitment and determination. He is universally loved by his players and respected by his fellow coaches.

He was inducted into the San Jose State Hall of Fame as a member of the 1958 NCAA Championship Boxing Team.