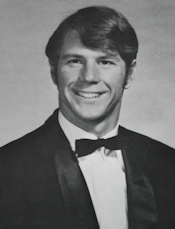 Jim Emery was one of the most intense athletes ever to put on a Cougars uniform. HMBHS was struggling to find an identity in the North Peninsula League until Jim came on the scene. He literally put the Cougars on the map. Jim was All-League in football his Junior and Senior years. He was also All-County his Senior year. Jim played 3 years of Varsity Baseball. His Junior and Senior years were his greatest. He was All-League both years and in his Junior year, he pitched every inning of every league game! He pitched three no-hitters that year and his ERA was less than 1.0. In his Senior year, he struck out 100 batters (which is still an NPL record). Jim averaged 13 strikeouts per game over his high school career.

At College of San Mateo Jim continued his dominance. He pitched in a State Playoff game that went 18 innings, not giving up a hit over the last 12 innings. CSM won, and Jim got the win. The San Francisco Giants signed him after his sophomore year at CSM. He was sent to Tri-Cities in the Northwest League, where he led the league in strikeouts, innings pitched, and complete games. He returned to Tri-Cities the following year and made the All-Star team. The other pitcher on the team was Rick Sutcliffe. Jim went on to play another three years of professional baseball.