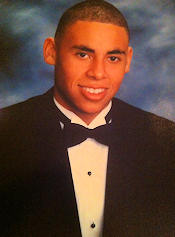 John William Parsons was one of the finest basketball players to come out of Half Moon Bay High School. A two-time league MVP and San Mateo County Player of the year, the Cougars went 50-11 in John’s junior and senior seasons. The Cougars also won the NPAL league title both years and qualified for the Central Coast Section playoffs.

John attended Claremont-McKenna College, where he was a four-year starter. He was co-MVP and an all-league selection twice, and helped lead the team to the 2006 SCIAC championship. He graduated from Claremont in 2006 with a dual major in Accounting and Psychology and a minor in Leadership Sequence.

Upon returning to the Coastside, where he works as a financial advisor and registered principal for Parsons Financial Advisors, John began coaching the HMB Varsity basketball team in 2007, and was instrumental in “resurrecting” the ailing program. In 2010, he coached the team to the Peninsula Athletic League Lake Division title, a championship run he still cherishes. He is currently the top assistant coach for the HMB Men’s varsity basketball team, as well as the coach of various CYO teams.

A Half Moon Bay resident since birth, John grew up rooting for the home team, and was thrilled to play alongside childhood friends for the Cougars. He was embraced by the HMB community. He credits a number of people for his success, first and foremost, his parents. His dad coached his teams from 3rd to 8th grade, and taught him that coaching is about making sure your players have a good experience and have fun. John also attributes his success to former HMB coach Dave Nutting, his varsity coach Kenny Milch, his teammates and current HMB head coach Rich Forslund.