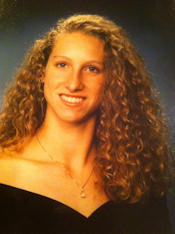 Katrina Saiia Ledgerwood is known for unbelievable athletic ability paired with exuberance for life. Teammates have described Katrina as charismatic, elevating the game of everyone she played with. When Katrina began playing varsity volleyball her sophomore year, she did just that. Katrina, at middle hitter, helped lead the Cougars to the school’s first two ever North Peninsula League championships in 1992 and 1994. In her senior year, the team went 30-3 and won the first-ever Central Coast Section playoff volleyball game in Half Moon Bay High School history.

Although Katrina would be the last to tell you, she is the most decorated volleyball player to come out of Half Moon Bay High School. Katrina is a three-time North Peninsula League first-team all league selection, a two time San Mateo County first-team all county selection, and as a senior, the San Mateo County Player of the Year. Her jersey, #11, was retired in the fall of 1994.

After playing competitive volleyball, Katrina took her love for athletics along with her passion for helping people and went on to get her BS in Exercise and Movement Science at the University of Oregon, then her MS in Physical Therapy at University of California San Francisco. Currently, Katrina works in a rehab setting in Spokane, WA, where she focuses on geriatrics and wound management. She also enjoys treating friends and relatives on the side. Katrina continues to compete athletically in many Pacific Northwest triathlons with the goal of competing in the 2014 Ironman Coeur d’Alene. She has been married to her husband, Dave, for over ten years, and has two children, Jaea 7 and Eli 5.