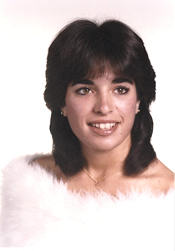 Lorena Ferreira made an instant impact on the Cougar athletic program as a freshman in 1981; she began her high school athletic career as a member of the varsity cross-country team and was named “Rookie of the Year.” In the next three seasons she was named “Most Valuable Runner” and was the top female runner on a team that captured four varsity league championships in a row. She was the pulse of the team. Lorena was the perfect complement to the low-keyed approach employed by Coach Dick Calvin. Coach would give the workout and Lorena would set the tempo and the example for others to follow. Her work ethic was such that she immediately established a high level of expectation not only for herself but also for her teammates. Lorena was named to the All-NPL, All-Region I and All-CCS cross-country teams.

Lorena used her tremendous running ability and great physical conditioning to her advantage on the hard-court. She didn’t need preseason physical training for basketball; she was ready to play as soon as she took off her cross-country running shoes. She could outrun any opponent up and down the court. Her high-tempo, spirited play was rewarded by being named team Captain of her frosh-team and then Most Inspirational and team Captain on varsity. Lorena led the 1985 varsity team to the NPL Championship. On the free-throw line, late in the game against Terra Nova, she sank two penalty shots to lock away the upset victory over the rival Tigers, and in so doing, captured the league crown. She was named to the All-League team.

Lorena was a dominant force on the track. Her ability to train at a high level of effort was rewarded with racing success and her constant encouragement and leadership in practice pushed her teammates to high levels of performance. She was very popular and the leader of the team, which at the time numbered 100. Not only did Lorena score more points in track meets for the Cougars during her years of competition, she led the girl’s varsity to the very first league championship in 1985.

Lorena graduated from College of Notre Dame where she majored in business administration and economics and competed in cross-country, basketball and track and field. Lorena continued running after college and has a best time for the marathon of 2:55.39. She is employed by Bristol-Myers Squibb in pharmaceutical sales, lives in Folsom and coaches basketball at Vista del Lago High School where her daughter, Dana, is a student-athlete.