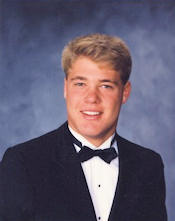 If Silas Moore set the bar for running backs at Half Moon Bay High School, Matt Ballard set the bar for wrestlers. Matt was a three-time CCS Placer at 189 pounds (one of the toughest weight classes). He placed 6th in his sophomore year, 4th in his junior year and 2nd in his senior year.  He was a two-time CIF State Qualifier and the first HMB wrestler to place at the state meet. In his senior year, Matt placed 5th in the State and lost to the eventual State Champion 6-4. Matt also played 4 years of football at HMB. He was All-League and All-County LB in his senior year. Coach McNevin says, "Mathew Ballard was one of the hardest working athletes that we have ever had on Cougar Hill."

After graduation from HMB, Matt walked on at UC Davis and played four years of football (3 on the Varsity level). He was a starter on the DL in his junior and senior years. At 240 pounds, he was typically outweighed by 40-50 pounds, but he found a way to survive and excel. In his senior year, he was voted Defensive Player of the game in the Causeway Classic, UC Davis vs. Sacramento State.

After graduation from UC Davis, Matt was hired as teacher/coach at Half Moon Bay High School. His wrestling teams won 3 League Championships and he sent 7 wrestlers to the State Meet during that time. His greatest coaching achievement was bringing HMBHS its first CCS Championship in Football in 2005-06. That same year he won multiple Coach of the Year awards from the San Mateo Times, San Jose Mercury, 49er Focus and Peninsula Athletic League. Coach Ballard is currently Head Football Coach at Redondo Union High School where he is having continued success.