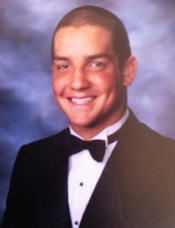 Michael Seaton lived Half Moon Bay Cougar Football from an early age, and proved that he would make his mark by the time he graduated. He dominated the gridiron as a sophomore and continued it until his senior year, where he led the Cougars to their only football CCS title.

He excelled at all phases of football, but shined most on defense. He was named 1st team PAL linebacker three years in a row, was the team defensive MVP in 2003 and Team MVP in 2004. During his senior year, Michael was the PAL Defensive Player of the Year, and was named 1st Team All San Mateo County Linebacker. He was also the Team MVP of the Central Coast Section Championship Team in 2005. He carried the ball 231 times his senior year for 1,209 yards and 13 touchdowns. He had 17 receptions for 177 yards, one touchdown and 97 tackles. On defense, he had five sacks, five forced fumbles, seven interceptions and three thrown touchdown passes. Despite his individual career success, he recalls winning the 2005 CCS Championship as the highlight of his high school career.

What defined Michael was the way he led an undersized Cougar team to a section title against a superior opponent. He raised the level of all players, and made sure everyone was accountable at all times. His love and enjoyment for the game showed during his career, and that enthusiasm has since transferred to his coaching style at the high school. Michael will always be Half Moon Bay High School Football's number one fan, and his jersey, #1, has been retired.

A three-sport athlete, Michael credits many of his coaches for shaping his successful athletic career and his life, especially Matt Ballard, Keith Holden, Don Dias and basketball coach John Parsons Sr. Michael remains active in the community as a coach, business owner and real estate agent.