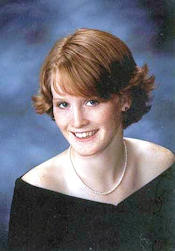 Sara Fulp-Allen redefined female wrestling at Half Moon Bay High School. Well-known and highly respected by the staff and students, she was also revered by the surrounding coastal community. And she did not let them down. Her successful wrestling career spanned high school, college and national competition, and she was one spot away from representing the United States in the Olympics twice in her elite career. Sara also worked hard in the classroom, earning consecutive spots on the honor roll while in high school and college.

As a member of the Half Moon Bay wrestling team all four years, she was the PAL League Champion (at 103lbs) and the Girls’ California State Champion three years in a row. She also competed on a national level, and was named the USGWA Girls High School National Champion in 2002 and 2003 and the FILA Junior and Cadet National Champion (46kg) in 2002. She placed 5th in the US Open in 2002, 2nd in the Fargo National Championships 2002 (101lbs) and was the 2001 Klippan International Champion (Cadet Division) in Sweden.

After graduation, Sara continued to earn honors in wrestling at the collegiate level. As a member of the Women’s Wrestling team at Menlo College, Sara became a three-time Women’s College National Champion. She was also the Pan American Champion, the US Open Champion, the FILA Junior National Champion and the FILA University National Champion. She also placed second in the Junior World Championships in 2005 and third in the University World Championships in Turkey. Team captain for thee years, Sara was also honored as the Co-Female Athlete of the Year in 2007. She was a member of the Student Athlete Leadership Council and graduated with a BS in International Business Management – Cum Laude.

At the same time, she earned a Master’s Degree in Business Administration from the University of Colorado. She has been an active member of USA Wrestling as the Oversight Committee Chair, Audit Committee; Athletes’ Advisory Committee Chair; a member of the Women’s Sport Committee; and a Volunteer National Coaching Staff.

Sharing in a big part of this experience is Sara’s younger sister, Katherine, who earned 3rd in the 2012 Olympic Trials and is presently an Olympic Training Center resident. Katherine has been Sara’s workout partner and international wrestling travel teammate for the past four years.