Class of 1978
Wrestling and Cross Country 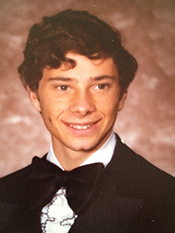 George Molina was a champion wrestler even before he entered Half Moon Bay High School. He was the 8th grade county champion at 81 pounds while a student at Cunha in 1974. Coached by Jack Coolidge, and assisted by Steve Calvin, George became a sensation on Cougar Hill. As a sophomore he was named the Most Valuable Wrestler, and wrestled on varsity all four years.

George recorded an overall record of 84 wins and 24 losses with six ties. His junior and senior year totals were 48 wins and eight losses. George enjoyed a fabulous senior year on the mat. He was the North Peninsula League (NPL) champion, CCS Region One champ and third in the CCS finals. He set the individual season record of most escapes with 45 and the career record with 119. George Molina was an important component of the Cougars varsity wrestling team that won the NPL title in both his junior and senior seasons.

George wrestled beyond the interscholastic program with equal success. In 1977, while still a high school student, he was the AAU California State freestyle champion, second in the state in Greco and first in Greco at the Junior Olympics National Championships. He also continued wrestling at the College of San Mateo.

George was not a one-dimensional athlete. He excelled equally on the Cougars cross-country team. During his frosh-soph season, the Cougars won the NPL and Region I championship. When he was a junior, the varsity team placed second in the NPL and went on to become league champions during his senior season. In addition to wrestling and cross country, George was also a member of the Cougars track and field team that finished his senior year with six wins and only one loss; the best record in HMB history at that time.

During George’s career, he amassed the following titles: Rookie of the Year, Most Valuable Wrestler, League Champion, State Champion, Outstanding Wrestler, Most Loyal and County Champion. The titles and awards do not describe what a fantastic team member George was and how he encouraged, and supported other Cougar athletes. George Molina was a true champion.

George Molina lives in Half Moon Bay, where he operates his own plumbing business.