Class of 2001
Basketball and Volleyball 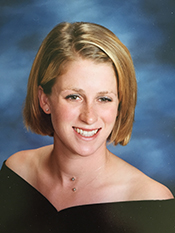 Gina Magagnini was a highly accomplished athlete in two sports. She was a starter on the varsity basketball team all four years at Half Moon Bay and in three of those seasons she was the MVP. She was named First Team All PAL three times for her high level of play. She was also named the North Peninsula and San Mateo County Player of the Year, and was named to the second team of the All-Metropolitan team.

Gina was named to the all-tournament team in every one of the nine basketball tournaments she played in as a Cougar. She was a very important part of the Cougars success in 2001 when the Lady Cougars had a 22-game winning streak and reached the third round of the CCS playoffs.

Gina started each school year playing volleyball — what she considered a “warm-up” season before basketball. Many people probably thought volleyball was her best sport, until they saw her play basketball. Gina was a four-year starter on the varsity volleyball team and was named MVP three times. She was also named First Team All League three times, and Honorable Mention All-County.

The significant people in Gina’s career, beyond her mother and father, Julie and Tony Magagnini and brother Dominic, were basketball coach Kevin Ostenberg, high school math teacher Chris Coulter and her teammates.

Gina attended Foothill College where she continued to excel on the hard court helping the Owls to reach the state “final eight.” She graduated from San Francisco State University with a degree in Child and Adolescent Development, and now serves as a branch director for the Boys and Girls Clubs of greater Sacramento.