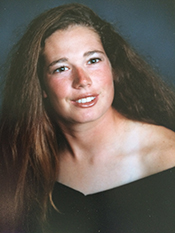 Rachel Pacheco was one of the most overpowering fast-pitch Cougar pitchers of all time. She ruled the infield with her aggressive, tough, take-no-prisoners attitude. She had the whole package: she was a tremendous competitor and very talented. The leg injury that slowed Rachel down during her junior season was mended by serious physical training. Her senior year was stellar. By the end of the league season, she compiled a record 18 wins and only five losses with an ERA of 0.23. She struck out 214 batters in 155 innings and as a batter she was a team leader at .425. Rachel earned First Team All-League honors in all four years of play, and was twice named her team’s MVP.

Rachel began her college career at College of San Mateo under legendary coach Tom Martinez. She was named a community college All-American and North Pitcher of the Year. Her great rise ball drew the attention of the coaches at Virginia Tech University where she continued her winning ways. During her senior year for the Hokies, Rachel’s pitching record was 13 wins and 6 losses with an era of 2.11, with seven complete games and 123 innings pitched. She was also an outstanding batter for the Hokies hitting .312 as a designated player her junior year and making All-Big-East honors and hitting .253 as a senior. Rachel was also named to the Big East Academic All-Star team.

Rachel acknowledges her dad’s significant contribution to her career by catching her during the off-season. She also credits family friend Bob Gaines, who she says was “the best coach I ever had.” Rachel reported how thankful she is “for everyone who supported me through this crazy dream. I know without everyone I wouldn’t have been able to be the athlete I was and the person I am.”

Rachel is currently a full-time faculty member of DeAnza College where she is the head women’s softball coach.