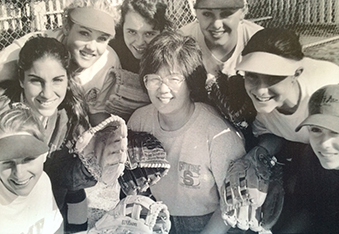 Naomi Patridge, a “woman for all seasons.” If she were in the movies, she would be a super hero. As a longtime member of the City Council and multi-term mayor, Naomi’s involvement in Coastside politics is well known. Her call to duty has never been self-serving like so many politicians. She has always served out of the kindness of her heart, for the good of the community and to have a little fun. And when she took on the job of head varsity softball coach at her alma mater, the fun really began.

Naomi took over the reigns of the Cougars softball team in 1984 and had immediate success. Her first team ended the season in second place. Over the next 12 years Naomi’s teams won ten North Peninsula League championships. A real coaching challenge occurred when the countywide Peninsula Athletic League was formed; the Cougars then had to compete with the stronger and larger mid and south peninsula high schools. Naomi met the challenge by elevating her program and the Cougars got tougher. They qualified for the CCS playoffs nearly every season. Eight times the Cougars were the CCS runner-ups and once they were the CCS champions.

Naomi takes pride in the fact that many of her student athletes continued on to college, with some even continuing to play softball. Naomi stated, “It was rewarding to watch a group of girls become a team...to develop a winning attitude in the program, along with good sportsmanship and respect.”