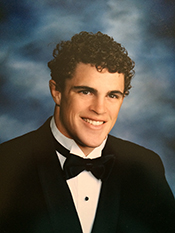 Joey Wilson earned acclaim as being one of the most successful wrestlers in Half Moon Bay High School history. In addition to his success at the high school level, Joey went on to become a champion collegiate athlete. He competed for the Cougars between 2003 and 2007, and in those four years, Joey won the Peninsula Athletic League championship each year.

Joey’s freshman year culminated with him placing fifth in the Central Coast Championships. As a sophomore he placed second at the CCS finals and second at the USA Wrestling Frosh-Soph California State meet. In Joey’s junior year, he was second again at the CCS meet; and as a senior, Joey was not only league and section champion but third in the California Interscholastic Federation championships, the highest placer ever for a Cougars wrestler. His high school career is marked by two significant championships—his frosh league championship, which he won before a home crowd and his CCS championship as a senior. Joey was also a member of a CCS championship cross-country team.

Joey dominated his opponents and in doing so, he rewrote the HMB wrestling record book. He set career records for most takedowns, 285; most escapes, 104; and most wins, 150. He also set the season record for 42 reversals.

Joey is especially proud to have lived in a small town where he enjoyed the camaraderie and spirit of competing at a small high school. He recognizes his brother Aaron, parents Kevin and Lynn Wilson, San Temko, Adam Piccollotti, coach Matt Ballard, John Rhodes and Don Lawson as being significant contributors to his success.

Joey competed at UC Davis for two years and when the wrestling program was dropped, he transferred to the University of Nebraska at Kearney where became a two-time All-American and an academic All-American. He graduated from Nebraska with a degree in communication, and works in sales and marketing for WrestlingMart.