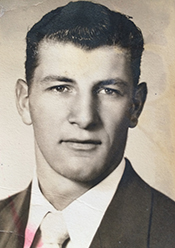 Leland Francis is best known for his baseball prowess. The 1950 graduate of Half Moon Bay High School, who also played on the football and basketball teams, was a fierce pitcher, averaging at least 13 strikeouts per game. It was typical for Leland to pitch the entire game, while resting only 1-2 days between starts. In his senior year, he was 6-1 in league play, and 17-3 overall. Leland was an All-League selection all four years.

In 1951, he was signed by the New York Giants. He was first seen by New York scout Eddie Montague, who’s son grew up to be a Major League umpire. Leland’s first stop was Santa Maria, which was close to home, so most of his family and friends were able to see his games. He was transferred to Eugene, Oregon, and finished the season playing in Lenore, North Carolina.

In 1952, he was inducted into the Army. He was transferred to special services because of a bad shoulder, which allowed him to continue playing baseball through the end of the season. He received an honorable discharge in July.

Leland was invited back to the Giants, but declined the offer, thus ending his brief professional career. He returned to the Coastside, where he worked for a concrete company, and coached his nephew and cousin’s son in Little League. Both boys were pitchers.

Leland continued to play baseball with his Army buddies in a winter league team based in San Francisco. He was also an avid San Francisco 49ers fan, going to games and tailgate parties. Following a 1991 playoff win, he suffered a heart attack in the parking lot at Candlestick Park and passed away. He was just 59.