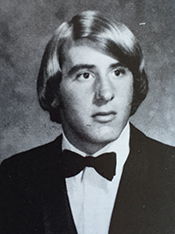 Pete Peterson grew up in San Gregorio, a place not noted for developing great basketball or football players. Lucky for Pete that his parents were very supportive of his desire to compete in athletics for they made sure he was able to get to practices and games. And once Pete laced on his shoes, magic happened.

Pete was a gifted athlete. He was not the fastest member of the football or basketball team but he had the quickest moves. His natural gift was being able to make his opponent move and then take advantage of the opponent being out of position to stop him from going where he wanted to go. If you saw Pete play football, you would think that football was his best sport; if you saw him on the hard court, you would think that basketball was his best sport. In Pete's junior year, he was named to the second team, all-league football team as a quarterback; in his senior year, he was first team all-league and all-county. His outstanding play during basketball season resulted in the same honors.

Pete enjoyed attending Half Moon Bay High School because it was "mellow and uncomplicated." Yet on the court, Peterson made life very complicated for his opponents. He played on the varsity basketball team for three years and averaged 19 points per game. Many who follow Cougar basketball and saw Pete play, still say that he is the best pure shooter ever. When asked what was a particular high light of his playing days at the high school, Pete responded that tying for the championship in football in 1972 had to be it. Half Moon Bay High School's student body barely numbered eight hundred, the players, like many of today, played both offense and defense, and competed against the big schools. Pete Peterson would have been a starter and a star on any high school on the Peninsula in either football or basketball. He truly had a "Hall of Fame" career.