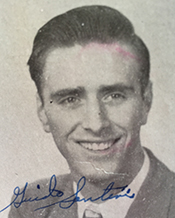 Guido Santini was a good basketball player for Half Moon Bay High School. But he was an even better baseball player.

The 1948 graduate was a three-time All League pick in baseball, earning him a block H with three stars. In Guido’s senior year, he was a candidate for the All PAL team. The HMB Review sports reporter Jack Praeder reported on May 20, 1948, “All season Guido played errorless ball behind the plate and the fleetest base runners were caught by his fast and accurate throwing arm.” At bat, his hard-hitting and fast base running was a big factor all season.

In his senior year at Half Moon Bay, the Cougars finished 3-5 in league play, 9-9 overall. Guido was a solid player that year, with the bat and behind the plate. He didn’t commit an error the entire season. A solid utility player defensively, he could play just about any position on the field. His smooth, powerful swing came naturally to Guido. He received no hitting instructions and developed his power instinctively.

Guido’s natural talent did not go unnoticed, garnering him the attention of Major League Baseball scouts. He was drafted by the Boston Braves, now known as the Atlanta Braves. Although he didn’t want to go, he tried out and made the team. They offered him $500 a month. A native of Half Moon Bay and a member of a prominent farming family, Guido declined the professional baseball opportunity and joined the family business at the insistence of his father. He remained on the Coastside where he worked as a farmer with his father, and was eventually named the Coastside Farmer of the Year in 2013.

Guido didn’t give up completely on his baseball career. He played semi-professional baseball for the Half Moon Bay team, the Townies, splitting his time between catcher and outfielder. He went 4-for-5 in a season finale game against San Mateo in 1955, boosting his average to a league-leading .434. He led the league with 23 hits, 13 runs batted in and four doubles.

Though happy with his decision to stay on the Coastside, Guido says, “If I had the chance again, I’d choose baseball.”