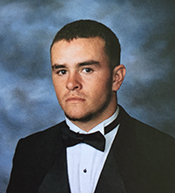 Some say Ricky Simms is the best all-around athlete ever to play for Half Moon Bay High School, lofty praise to be sure. The trouble is that virtually no one has witnessed all of the Cougars greatest athletic feats. What is absolutely true is that Ricky Simms was the best in his era and among the best ever. Ricky’s high school athletic career started out with a bang. He was called up to the varsity baseball team as a freshman. By his sophomore year, he was named First Team All PAL and Most Improved Player. As a member of the championship frosh-soph football team, Ricky was named the MVP and First Team All League.

Ricky continued his championship ways as an upperclassman. He was named First Team All League in his junior year in football and First Team All League in baseball. He was also the baseball team’s MVP. Ricky’s senior year was the most memorable. The 2005 Cougar football team went undefeated and won the school’s first CCS football championship. Ricky was named to the First Team, All San Mateo County team. And then he did it again in baseball. He was the MVP of the Cougars baseball team, All League and All San Mateo County.

When Ricky looks back on how his athletic career affected his life, he says, “The life lessons I got from my teammates and coaches outdid any obstacles in life that I have yet to come across. Hard work, determination and heart and the ability to never give up have made me the man I am today. It’s not a group or a school district, it’s a family.”

The significant contributors to Ricky’s development were baseball coach Tony Magagnini, and football coaches Matt Ballard, Keith Holden, Gary Torri, Powell Chee, Don Dias, Jamie Barry and Steve Terraszas. Ricky also credits his father for instilling in him the “drive and the will to never give up.”

Today, Ricky makes his home on the Coastside and works at the City of Palo Alto. Ricky is aspiring to begin coaching and is looking forward to mentor young student athletes to become great.