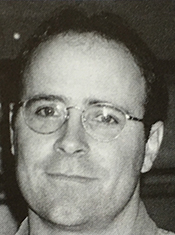 David J. Nutting, a Burlingame native, came over the hill to coach basketball at HMB from 1987 through 1998. He describes his years at HMB as a “storybook career.”

He was inspired to pursue a career in coaching by his 9th grade coach, Rob Grilon, and learned much of what he practices to this day from his varsity assistant coach Marty Gale. At HMB, he gained valuable skills from Chuck Short, his colleague in the PE department. Ted Begy, the HMB girls basketball and volleyball coach also took Dave, a young 24-year-old rookie coach “under his wing” and provided encouragement and guidance. Another dear friend during those years was John Parsons. They played a lot of basketball together and Dave regrets having to leave HMB before having the opportunity to coach John’s son John Williams, who he had worked with at summer camps and skills clinics since he was a toddler.

Dave was able to coach hundreds of kids during his tenure however and feels privileged to have had so many great players. The parents made him feel like he belonged to their families and he maintains close friendships with many of them to this day.

There were many great moments during his years at HMBHS. Some highlights included winning his first league championship during his fifth year of coaching. The players on that team had been with Dave since their sophomore year and had truly become a family. The following year, his team won a second league championship. In addition, that season represented the most wins he had ever had in his coaching career! The excitement continued when HMB once again secured the league title the following year and then went on to win one of the first section titles in the school’s history.

After a decade at HMB, Dave and his wife were blessed with the arrival of their son, and in order for his wife to stay home and raise him, they left Half Moon Bay for a more affordable area. Dave cherishes the memories of his days on the Coast and over the years has often wished that he could be back “coaching at the Moon.”

His accomplishments and contributions to his beloved Cougars family will always be remembered. The skills and life lessons he passed along to his players will always be with them.