Class of 1991
Football and Baseball 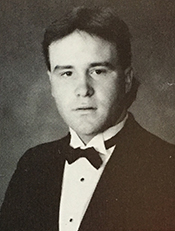 James Richard Deeney was born in Redwood City in 1973. He attended Half Moon Bay High School from 1988 to 1991, earning honors in both sports and academics.

Athletically he received All-County, All-League and team awards such as Most Valuable Player and Most Improved player during his years at HMB High School. The highlight of his high school career was just playing sports in a small town atmosphere with friends who will last a lifetime.

Football for Jimmy proved to be successful during his four years at HMBHS. As a sophomore in 1987, the Frosh-Soph team had an undefeated season. As a Varsity football player, he played on the first undefeated football team in HMBHS history with a 9-0 record. That team went on to win the league and be ranked #9 in the AA Division & #1 in San Mateo County for nine weeks running. During Jimmy’s freshman year, he was awarded First Team All League for football. As a sophomore, his success continued with 2nd team All-League on the varsity football team, and he was voted Most Inspirational Player. Junior year his awards kept coming as he again made 1st team All-League for football, led the team in total defense and was awarded "Most Inspirational" by his teammates. He was again named First Team All League as a senior, and also named to the All-Star team for defense as a linebacker.

With the encouragement of his high school coach mentors Neil McNevin, Don Dias, Gary Dilley, Jack Coolidge and Mike Krieger, he went on to play baseball at both Cañada College and College of San Mateo until a shoulder injury prevented him from pursuing his career further. He credits his coaches for inspiring him to play college ball.

Jimmy continues to live and work on the Coastside. He is a property manager for various ranches, which includes working for his family business raising black angus cattle and growing red oat hay. In 2004 he married his wife, Jessica, who is also a HMBHS alum. Together, on their ranch just south of Half Moon Bay, they are raising their three daughters, Olivia (10), Tessa (8) and Mariah (8). In his free time he watches his nieces play softball at HMBHS where they are making their own mark on Cougar athletics. He also enjoys archery, hunting and fishing and has coached softball for the HMB Girls Softball League for the past four years. He enjoys being able to spend quality time with his daughters, away from technology. The league means a lot to his family and has taught his daughters important aspects of being an athlete, including camaraderie, confidence, perseverance and a love of the game.