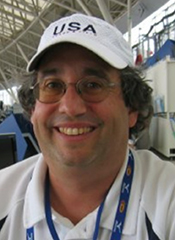 When Mark Foyer covered his first Half Moon Bay High School event for the Half Moon Bay Review in 1997, he could have never guessed that his vocation and avocation would meld so beautifully. But in no time Foyer became a familiar face at the high school and the face of the newspaper at many community events. Over the next 20 years, Foyer would be on hand for wins and losses that span generations of Cougars. He values every sport and every competitor, not just high-profile Central Coast Section champions.

He holds a special place in his heart for track and field. His coverage of the Artichoke Invitational is just one example of how he raised the profile of Cross Country within the community and well beyond.

Mark has won a closet-full of writing awards over his tenure. In 2009, he received the Central Coast Section Distinguished Service Award. More recently, in 2015, he was honored with the Boys and Girls Club of the Coastside’s “From the Heart” award, which goes to a community member who goes the extra mile for area youth. It isn’t surprising that Mark hesitates when asked to remember particularly special moments. They are all special to Mark.

“It’s been my honor to watch the athletes reach goals they didn’t think were possible,” he said. “There are so many special moments to mention that I don’t want to miss anyone.”

Mark says he couldn’t have done all that he has done for the community without the support of his family. He also wants to thank some mentors from his past—Chris Stave, who was the San Mateo County sports editor of the San Mateo County Times, San Francisco Examiner prep writer Merv Harris and College of San Mateo journalism teacher Al Alexandre.