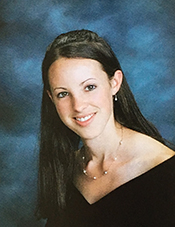 Liza Reichert (nee Hitchner) was born in San Mateo and raised on the Coastside. Like many of her classmates, she spent her childhood in the Cabrillo District and enjoyed growing up in this close-knit community. From age four through her high school years, she took dance lessons at the Susan Hayward School of Dance. She also studied piano from the 4th grade on with Pat McNutt (the organist at the United Methodist Church).

Upon her arrival at Half Moon Bay High School (HMBHS), she became involved in a variety of activities and academic pursuits. She played the flute in the marching band and enjoyed performing at every home football game. She served as a Class Senator and was Valedictorian for the class of 2005. She loved the pumpkins decorating the school roofs at homecoming and enjoyed taking AP Biology (her favorite class).

When she wasn’t marching on the field, she spent time running the track and local trails. She competed in both Cross Country and Track. Her Cross Country coach, Kevin Ostenberg, helped her to find her passion for running, something that continues to be part of her life today. Liza gathered many athletic honors during her years at HMBHS. She was a PAL Cross Country Champion in 2004. She was also the PAL Champion in 2005 in the 1600 and 3200m races. She was a three-time Cross Country State Championship Team Qualifier. She was named Athlete of the Year for 2004-2005. Lastly, she capped off her HMBHS career by qualifying for the State Meet in the 1600m. At that time, she was the first athlete to advance to the State Championship from HMB in nearly 20 years! She placed 3rd at the CCS Championships setting a personal best time of 5:02—an HMBHS record which has yet to be broken!

Her most memorable high school race was at the 2004 Mt. SAC Cross Country Invitational. She won that race, leading HMB to a team win. In addition, that victory propelled HMB into the CA State rankings and ultimately led to collegiate recruiting interest in Liza. After graduation, she received a NCAA Division 1 scholarship and continued her studies (and her running) at UC Santa Barbara, where she was a member of two Cross Country National Championship qualifying teams. When not competing or training, she earned a BS in Microbiology (with Honors) and a Master’s in Molecular Biology.

She continues to run with the Aggies Running Club. She married Kota Reichert in 2015 and qualified for the 2016 Olympic Trials in the Marathon, running 2:42:24 in December 2015. She and her husband both enjoy running when they are not working at Stanford Hospital, she as a clinical researcher and he as a physical therapist.

The passion for running which Liza discovered at HMBHS continues to propel her forward today. Just this past summer, she ran her personal best mile time of 4:45!