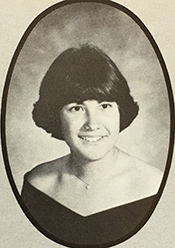 Dianna Lyda-Savich was one of the hardest working, most dedicated student athletes in the history of Half Moon Bay High School. Had she attended any other high school, regardless of its size, she would still have been a star. In the sport of softball, Dianna posted such a successful entrè to Peninsula athletics that she was named to the All-County team as a freshman, sophomore and senior. She was All NPL for four years and helped the Cougars win two NPL Championships in 1979 and 1981. Dianna continued as a multi-sport athlete throughout her years on Cougar Hill as a member of the softball and basketball teams. She achieved many all-conference and regional recognitions in each sport. As a senior, Dianna was named the “Most Outstanding Athlete” in the school—not most outstanding female athlete, but most outstanding athlete. Capping off her senior year her softball batting average was .435 which put her at 15th in San Mateo County out of 350 players. She led the Cougars in homeruns, triples and doubles that year. Dianna was so commonly rewarded with honors, that she has forgotten most of what she earned but she knows that her long-time mentor, coach, and mother, Naomi Patridge, will be able to give details if asked.

Dianna attended San Diego State University upon graduation from Half Moon Bay High School. It was as an Aztec that Dianna tried a new sport, rowing, and to no one’s surprise, became a champion. During her two years as a member of the Light Weight 8 Women’s and Open Women’s teams, she achieved gold medals in the San Diego Crew Classic (largest West Coast regatta), Oxnard All American, Pacific Coast Championships and the Western Sprints in 1984. That same year, her team won the silver medal at the Women’s National Collegiate Rowing Championships in the Women’s Light Weight 8 Division.

Attending a small high school gave Dianna the opportunity to be involved in many activities in addition to athletics. She named student government, music and yearbook as some of her favorite endeavors. Dianna also gives credit to faculty member/coaches Susan Steach, Ted Bregy and Vicky Hierro for their guidance and support in helping her become the athlete and person that she is. It takes a village when it comes to athletics and developing a young athlete. Dianna offers that it is not the winning plays or stats that she remembers most from her years as an athlete on Cougar Hill, but the many “small moments,” which she calls the “sweet spots of life” that are so important, the “habits, determination, perseverance and lifelong relationships with fellow teammates" that she learned while playing sports. Today, Dianna brings that same spirit to her two daughters, Addison and Taylor, as they embark on their early sports experiences. Congratulations Dianna, you are now a member of the Half Moon Bay Athletic Hall of Fame.