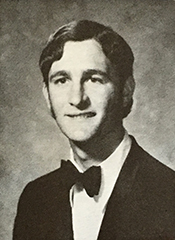 Joseph Jeffrey Ormonde attended Half Moon Bay High School from 1970 to 1974. He was part of a new generation of Cougar student athletes that began to challenge and win against larger high schools on the Peninsula. Since both of his parents grew up in Half Moon Bay, and his father attended HMBHS, Jeff was well known on the coast. He was a big kid as a freshman with strength and athletic ability that would make him a star player in both basketball and baseball.

Jeff’s basketball career culminated in being named to the All-NPL team in his senior year. But more important to Jeff were the memorable times he shared with his outstanding teammates like fellow Hall of Famer Pete Peterson. Jeff credits his coach, Chuck Short, with “encouraging” him to want to excel.

Jeff’s best year in baseball as a batter was his junior year; his best year as a pitcher was his senior year. Jeff’s varsity batting average was over 300; his ERA was a stingy 1.20, which was the lowest in the North Peninsula League and the lowest among the Cougars hard-ballers before him. Pitching helped propel him to the All-San Mateo County team. 1974 was a special year for Cougars baseball because it was the first time HMBHS won the league championship after joining the NPL in 1965. The team was so good that five members were named to the first-team All-NPL and Jeff was selected as the Cougars MVP.

One unusual accomplishment in Jeff’s pitching record came in his senior year in the Easter Tournament when he pitched two games in the same day and won both! The first game was a one-hitter and the second game a two-hitter, and the Cougars won the tournament! After graduation, Jeff attended and pitched at Cuesta College.

Jeff gives credit to his coaches Neil McNevin and Chuck Short for contributing to his athletic experience. He also acknowledges the help he received from English instructor Bill Hermanson and Gary Dilley for encouraging him to attend college and continue playing baseball.