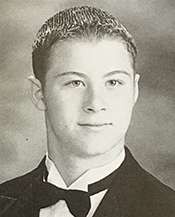 Samuel Lawrence Roseberry Temko, a San Francisco native, attended Half Moon Bay High School (HMBHS) from 1999 to 2003. Wrestling was a big part of his high school experience. He says, “From the first time I stepped on the wrestling mats, I felt like that was where I belonged and was welcomed onto the team like a family member.” The coming of age process that we all go through during our teenage years can be a turbulent one, and it is a testament to the high school and the people who surrounded Sam during those years, that he was given a place to develop into the man he is today.

During his four years at HMBHS, Sam received a myriad of honors and accolades. They included multiple Peninsula, Livermore and Las Lomas Invitational Champion titles, Coast Classic Champion, Mid Cal Champion, two-time PAL Champion and two-time CCS Medalist. In addition, he was selected as team captain in both his junior and senior years, received the Steve Imamura Award in his junior year and is a member of the 100+ Win club. An impressive record! For Sam, two of his most memorable high school moments were first, in 2002, when HMB defeated Terra Nova for the PAL league title. This one was special to him as it was the only team title during his time at HMB. Rivaling the excitement of that win was when he was awarded the individual section title in 2003, the first HMB wrestler to ever do so! He became the first CCS Champion wrestler from HMBHS and finished in the top ten at the CIF State Championships.

Sam credits several important people in his life for helping him find a “home” on the wrestling mat. First, he described his father Dan Temko as his “biggest supporter” and the person who took him to countless matches, practices and tournaments. He could not have done what he did without his dad’s “relentless support.” Next, Coach Lee Allen; his technical knowledge was “second to none.” Coach John Rhodes was “always there for me and believed in me.” Coach Tommy Baker “inspired me every day to improve myself.” And lastly, Coach Matt Ballard “was an inspiration and a great leader for our team.” These individuals, and many more, taught Sam that “wrestling for HMBHS was all about brotherhood, camaraderie, home town pride, being part of a legacy, self-improvement, discipline, commitment and developing a work ethic.” In addition to the academic education he gained in high school, the lessons he learned as a wrestler were tremendous gifts that he was able to take with him after his last match as a Cougar.

He continued his education and wrestling career as a member of the NCAA Division 1 Cal Poly Mustangs. He graduated in 2008 with a BA in Business Administration and then used his final year of eligibility to wrestle for Skyline College in 2010. That year, he earned All-American status, finished in second place at the California Community College State Championships and was named Outstanding Wrestler for the Skyline team.

Sam joined the HMBHS Wrestling Coaching staff in 2013 after creating a year-round wrestling club in Half Moon Bay. It has been an exciting three years for HMBHS wrestling with the varsity teams emerging as undefeated PAL Champions from 2013 to 2016. During his three seasons coaching, HMBHS teams have earned 11 individual CCS section medals.

For Coach Temko, his life has come full circle. He is now able to instill his love of wrestling and support and encourage his athletes in the same way that he was guided during his time at HMBHS. Through coaching he is able to give back to his community and is always aware that “creating good individuals in life is just as important as creating good wrestlers on the mats.” He loves to watch his athletes dedicate themselves to their sport and in doing so, become better people as a result.